Fight the Dragon on Steam

I seem to have a knack for finding games that have really interesting concepts that don’t quite work for me.  Fight the Dragon is an cutesy ARPG with a twist – almost all of the content is made by other players using the built in Adventure Creation Kit. If you’re the type that’s more interested in creating content than playing it, I imagine that Fight the Dragon would be a fantastic value, but for those of us who just want to beat things up and pick up some loot, the game feels like it’s missing something. 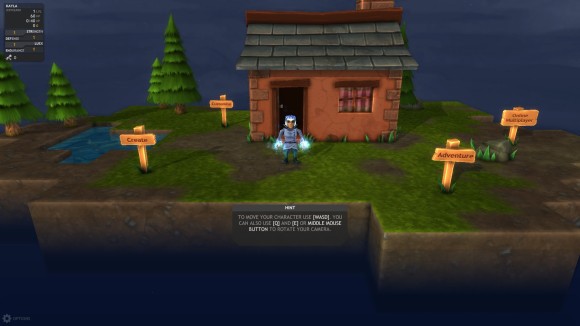 There are four classes that you can choose from, but when you first start out, they don’t play all that different.  It was really hard to get enthused by my ice mage when I was spending most of my time sticking the bad guys with the pointy end of my sword.  Of course, there is a level up mechanic, which allows you to customize your character a little at a time, but the game couldn’t hold my attention for me to really see that come to fruition.

The controls are awkward, loot is unimpressive and not as frequent as one comes to expect from an ARPG, and I felt as if I was spending more time trying to work out puzzles than actually slaying monsters.  If I’d gone in expecting a puzzle game, I may have felt differently about that, but the fiddly-ness of some of the positioning when combined with controls that didn’t feels smooth using either the mouse and keyboard or a controller didn’t inspire me to persevere.  More than once, I managed to waste a life falling off the edge of the world. There’s none of the mindlessness of play that tends to characterize ARPGs here.

There were a few mechanics I really loved – the checkpoints being the primary example. Standing on a checkpoint will let you restore health, but only up to a set amount – once you’ve used it up, it’s gone. I thought the mechanics of dealing with unwanted loot were interesting, even if slightly counter-intuitive. Fight the Dragon isn’t a game that I hated – it just didn’t meet my expectations.

Although it’s probably a lot of fun for dungeon builders, and enjoyable for co-op players, for me, there’s not enough I liked to make it worth powering through the frustrations. I’m glad to have supported an excellent concept, even if in a small way, but it’s not a game I am likely to return to, nor is it one I would easily recommend to fans of ARPGs.