Her Story on Steam

There are a million ways that Her Story is not a game for everyone (and some would argue, not even a game), but it’s one of the most unusual games in recent memory. It is in some ways a puzzle game, in some ways, a narratively experimental interactive novel. It is also absolutely fascinating, if you take the time to really watch, listen, and lose yourself in it. 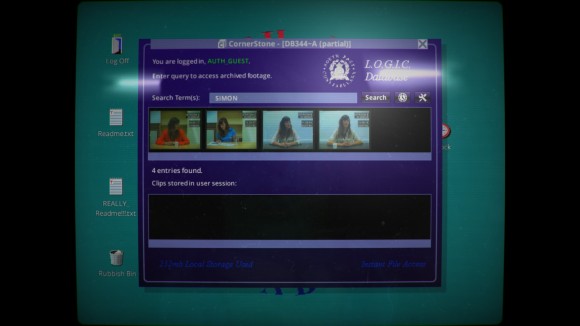 You’re given an old school computer interface with a couple of readme files, and a database you can use to search for video clips of a series of police interviews from 1994. The first search term is entered for you – MURDER – and as you watch the clips, you learn more about what’s going on, which should lead you to search for new keywords that you’ve come across.

In many ways, Her Story is a cerebral experience, which makes it all the more irritating that your searches are hindered by the artificial limitation of only allowing you to see the first five clips that come up as results. Some of the clips are ridiculously short – a word or two – which can sometimes feel like they exist only to slow your progress in figuring out what actually happened.

And even if you manage to watch every clip in the game (there are ways to track your completion as well as percent completion achievements), you still won’t 100% know the truth.  The game’s creator has said he’s not telling.  If you’re not comfortably with ambiguity, you may not be thrilled with the conclusion of the story.

I personally found the game fascinating and somewhat challenging.  The itch to find the missing pieces to confirm what I thought I knew was almost compulsive. I think this is probably a game best played in a single sitting – having to step away and come back to it threw me off. I also recommend doing as little pre-searching as possible; it’s a game you want to come into with no idea what you’re going to see.  There’ll be plenty of time afterwards to search out a YouTube that will show you all the clips in order.