Mark of the Ninja

Mark of the Ninja on Steam

I tend to like the idea of stealth games better than the reality.  I tend be a little clumsy with my controls – whether it be keyboard and mouse or a controller – and clumsiness is the fastest path to death in a stealth game.  So what I’m saying here is, for me, Mark of the Ninja is goddamn hard, but I wouldn’t have it any other way.

After a couple of short play sessions, I feel pretty confident in my assessment that the Assassin’s Creed Chronicles games took a little bit of inspiration from Mark of the Ninja, and personally, I prefer the look of Klei Entertainment’s version.  The UI manages to be both very clean and fully informative.  Keyboard and mouse control is actually reasonably solid; there is full controller support, but a controller doesn’t feel as mandatory as it does in other games with platforming elements.  There are multiple checkpoints per level, which is great, but there is no save anywhere functionality. 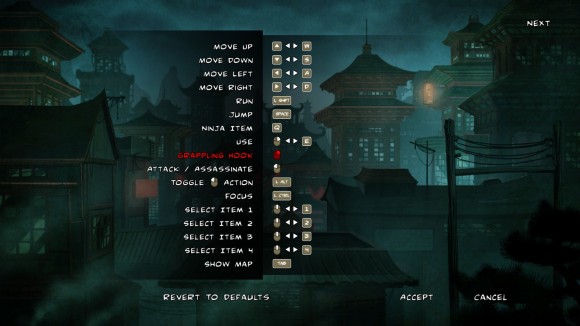 Although the main story will only take about 8 hours to complete, there’s considerable replay value built in with score challenges and support for different playstyles.  There is also new game plus functionality upon completing the main game.  I definitely can see myself getting my money’s worth here at full price. It’s currently on sale for only $3.74, and Mark of the Ninja is probably the best 2d stealth game available, so if it’s not already part of your Steam library, this would be a fantastic time to pick it up.