Life is Strange on Steam

If you like video games at all (and if you don’t, boy, have you stumbled on the wrong blog), you’ve probably at least heard of Life is Strange.  The second game by Dontnod Entertainment was nominated for a whole mess of awards, and was lauded by both critics and players alike.  It’s a narrative-driven adventure game, done in the episodic style usually associated with Telltale Games.

I want to start off by saying that I am almost never impressed with anything once it reaches this level of hype. The more people who tell me how amazing something is, the less likely I am to agree with them.  My expectations get inflated to an unrealizable level.  In some ways, Life is Strange fell victim to this for me as well, but overall, I get it. I understand why people love this game, even if they might not love every aspect of it.

Frank talk for a minute: the last time I got excited about a version of the high school student saves the world trope was back in 1997 when Buffy the Vampire Slayer was the hot new prime time show, and back then, high school wasn’t quite such a distant memory.  I felt like I was experiencing early onset “Hey You Kids Get Off My Lawn” several times during the first chapter, because I wanted to shake the characters and ask them if they had any idea how ridiculous they sounded. But – and this is important – they sounded ridiculously authentic, and that matters. It matters a lot. 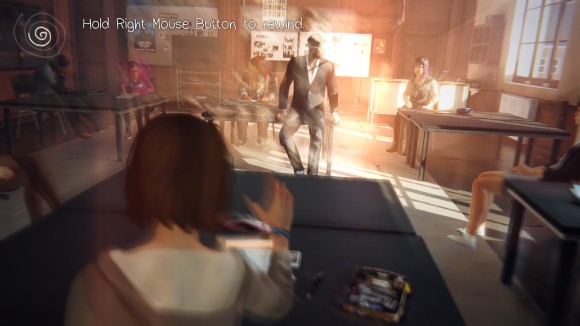 The other aspect of the game that I had a love hate relationship with was the major mechanic of the game – the ability to rewind time.  Although several times it was used to interesting effect, mostly, it just felt like a get-out-of-jail-free card when you didn’t like the immediate reaction to a choice you had made.  When you consider that Life is Strange is so strongly narrative driven – possibly to the point that the story & the writing are the strongest aspect of the game – I have to wonder how much of a difference those choices will actually make in the end. The story is paramount here, and it will be told no matter what the player does (and doesn’t) decide to do.

Several times, I thought to myself that Life is Strange just wasn’t doing it for me, and it made me a little sad, because there are aspects of it I am well and truly enchanted with. But once I got to the tail end of the initial chapter, I was really glad I had picked up the full season during the Autumn Sale and wasn’t going to have to cough up $20 to find out what happens next. Because I need to know what happens next.  I’m in it now, for Max, for Chloe, for Kate, for Warren. And I’m pretty sure that is how Life is Strange became such a modern classic.