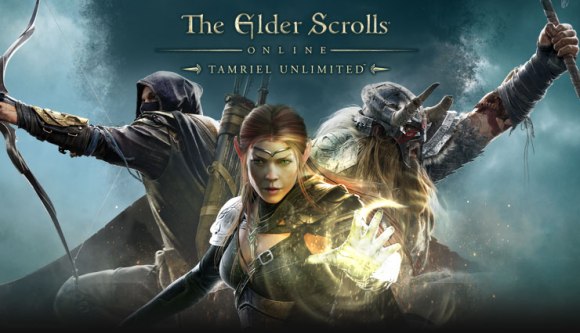 Since there’s no way that this review is going to be anywhere near impartial since I can’t resist anything set in the Elder Scrolls universe, I’m going to frontload the important information here.

Elder Scrolls Online is currently having a free-to-play weekend on both PC/Mac and PS4.  Until Sunday, November 20th, you can download and play the base game with no up-front investment.  If you choose to purchase after the free weekend, the base game is on sale on Steam for just under $10 until November 23rd. The Gold Edition includes the first four DLC packs.  There is currently also a sale on Crowns – Tamriel Unlimited’s premium currency – which would allow you to add the first four DLC to an existing account for $23.99. If you’re in the market for a new MMO without the monthly subscription, there’s never been a better time to try out The Elder Scrolls Online, and the free weekend means you don’t even have to take my word for that. 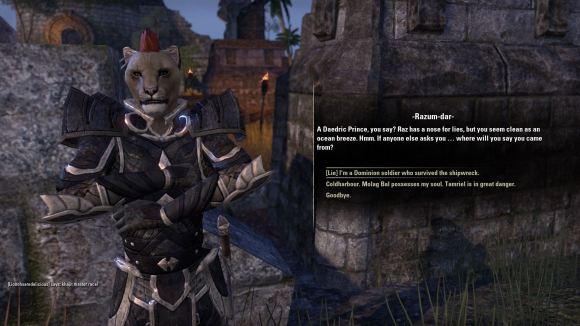 Let me take a second and tell you about Razum-dar. This Khajit with a mission is probably the number one reason that every time I start a new character, I want to be a part of the Aldmeri Dominion faction. He’s one of the first folks you meet after the tutorial level, and he’s going to take you on a wild ride … or not, your choice. Which of course, this is an MMO, so it’s not really your choice, but I’d be surprised if you didn’t want to follow anywhere he wanted to take you.  He’s probably one of my all time favorite video game NPCs. 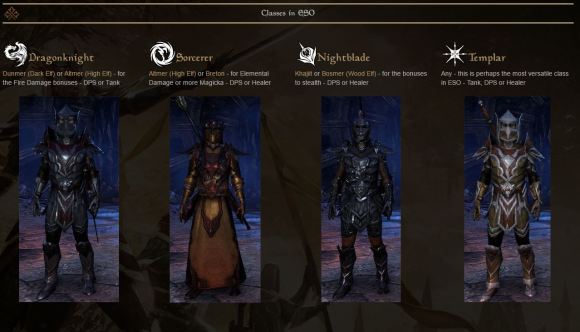 There are 9 races in the base game, with the Imperial race available if you purchased the Imperial edition when it was available, or purchaseable through the Crown Store. These races are divided into three factions, and you are restricted to playing in the default faction unless you also purchase the Adventurer’s Pack (which was also available as part of the pre-order bonus on release), but this is pretty much the end of the restrictions on play.  Any race can be any of the four classes in the game, and any class can equip any type of weapon or armor.  If you browse through the skill lines (which I highly recommend doing before you get too deep into spending your points), you’ll see that there are some combinations that make more sense than others, but you are free to play as you choose. 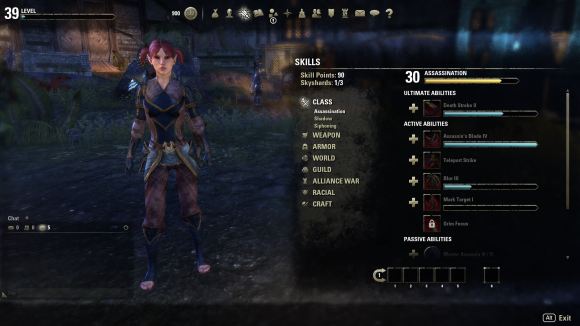 There are a lot – and I do mean a lot – of skill lines in the game, and you will need to invest points into crafting skills as well as combat skills.  You are limited to five active abilities and one active ultimate at a time, although you will be able to switch between a primary and secondary weapon which will change your active skills as well.  Since any class can equip a healing staff, or a one-handed weapon and shield, you’re not restricted to a traditional role based on class the way you might be in other MMOs, but it’s important to note that you will never be able to unlock all skills on a single character, so you do want to specialize somewhat.

Personally, I loved this game on release, when the general consensus was that it wasn’t all that great.  Since that time, they’ve just kept tweaking the mechanics to bring the game play up to the level of the writing and the setting.  Although browsing the Crown store might give you the impression that the whole thing is just shameless cash grab, you can pay an optional monthly subscription fee to gain access to all current DLC for the length of your active subscription.  I’ve gotten away from games that require subs; preferring to toss some money at it while I’m actively playing without worrying about how much time I have available to put in.  In fact, the only reason I ever stepped away was the fact that I didn’t have either the time or spare cash to double up on subscription fees, and at the time, I was also playing a whole lot of World of Warcraft (which I chose over ESO more due to social reasons than gameplay ones).

You could easily get hundreds of hours of gameplay just out of the base game without spending another dime – with 8 character slots, and continued progression after reaching max level, there’s just so much to do.  The current sale is a historic low for the base game, so there’s no better time than right now to pick it up.  There’s definitely a component of grind here (I recall some of the things required for crafting to be particularly arduous, but I haven’t had the opportunity yet to see if that’s at all improved), but even just playing through the quests should bring a smile to the face of most Elder Scrolls fans.