The Big Secret of a Small Town

The Big Secret of a Small Town on Steam

Although I love the vast diversity available in types of games nowadays, it irritates me greatly that the people who make these games don’t always know what to call them (and let me tell you, Steam’s user-created tags system just exacerbates the problem). The differences between a hack & slash RPG and an ARPG are pretty significant, and hidden object games describe a very specific subset of point & click adventure and puzzle games. Sure, this one’s at least partly on me for believing the tags, but just because there’s some irritating pixel hunting in a puzzle game, it’s not a hidden object game.

My first clue should have been at the difficulty selection; what I was about to play was a puzzle game.  But in this episode of I fail at reading things, I went with detective difficulty (since the puzzles in hidden object games – which I thought this was – are pretty simple most of the time).  Don’t get me wrong. I like puzzle games.  I found The Room absolutely delightful, but going into a game with the wrong expectation can totally ruin it. Despite the fact I wasn’t really in the mood for a puzzle game, I wanted to try to give it a fair shake. 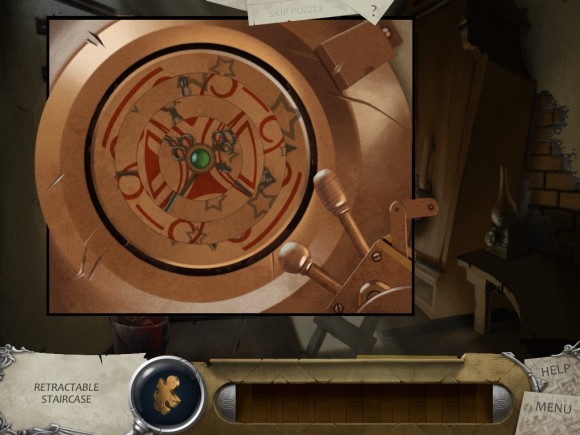 Here’s the thing – it’s still not that good of a puzzle game. I can forgive that I had to unscrew screws with a giant knife I just pulled from a scarecrow’s chest.  I can forgive that there’s a key in a footprint in the mud on the ground.  However, in the puzzle above, the first real puzzle of the game, the freaking stars don’t line up.  They look like they should line up, but nope. So what should have been a fairly easy puzzle was made infinitely more difficult by the addition of a red herring element.  It’s a bit early in the game for me to start thinking that it’s not giving the player a fair shot.

Puzzle number two was straightforward enough, but the route to get there was beyond irritating.  It’s difficult to tell which items are interactable, and the logic of what you can use where is … well … less than perfectly logical. However, before I could even start on the next puzzle, there was some ridiculous pixel hunting in order to find 5 buttons and 2 levers to activate the puzzle.  Unfortunately, when you pick up the second lever, it knocks over a box, spilling sand onto the puzzle surface, requiring you to go backtrack in order to sweep up the sand, and that’s when I realized I had no patience for busywork.  And this game was shaping up to be full of busywork.

As much as I harp on the entertainment hour per dollar value of games, I’d rather have a short well-paced game than a frustratingly padded one.  And given that the length of this game is less than 3 hours, there’s just not enough here that’s good.  In a game this short, the puzzles need to be flawless, and with only 1 of 3 making any sense to me at all, it wasn’t a good start, and I can’t recommend this at any price point.