Puzzle Quest: Challenge of the Warlords

Puzzle Quest: Challenge of the Warlords on Steam

I still remember how excited I was about Puzzle Quest: Challenge of the Warlords the first time I played it.  It was a light RPG, which was great for playing casually, but instead of traditional combat, all battles were decided by matching gems and using the mana collected to cast abilities.  It was a pretty addictive combination, and it’s been imitated many times – with varying degrees of success – over the last nine years.

There are four classes to choose from – Druid, Knight, Warrior or Wizard, with each class having varied starting spells and statistics.  The only other initial customization you have access to is choosing one of four character portraits (which also determines you gender).  Hey, I said this was a light RPG. 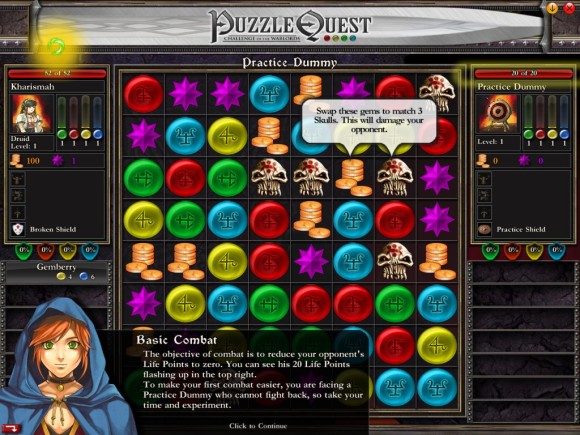 But if you don’t enjoy match-3 games, well, what are you doing playing Puzzle Quest in the first place? There’s a decent story here, and meaningful character progression, but really, it’s all about kicking the crap out of monsters via matching.  You’ll get a couple of short tutorial quests to give you the basics of how the different tiles work, but really, what you need to know is that you never want to leave skulls ready to match for your opponent, as those are the direct damage tiles.  Your spells will be listed on the left side of the screen, along with the mana needed to cast them, and you can see the same information for your opponent on the right.   Depriving your opponent of the mana they need is absolutely a valid strategy, provided it doesn’t result in leaving skull matches open. 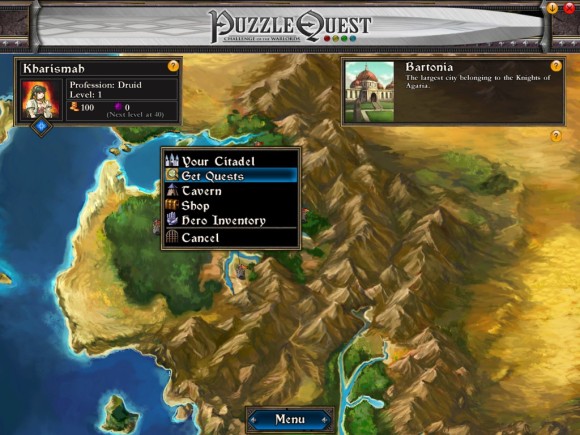 When you level up, you can choose which stats to improve, and most towns have some place where you can spend your gold on better equipment.  You can expect to get about 40 hours out of a single playthrough, which makes it a pretty meaty game.  Sure, it looks a little dated now, but it’s still absolutely worth the $10 asking price, especially if you’ve enjoyed similar games in the past.