You would think, by now, I would have learned the difference between a game that describes itself as an ARPG and one that describes itself as an action RPG. Let’s ignore for a second that the A in ARPG does, in fact, stand for action. When I think of an ARPG, I’m expecting click-to-move, hold-shift-to-stand-still while clicking to attack, and basically, you click and click and click some more and then pick up your piles and piles of loot.

However, I normally slide action RPGs into my “Hack and Slash” Steam category.  I tend to struggle more with these type of games because WASD movement is frequently the bane of my gaming existence, and when, like in Venetica, your ready weapon button sits right on top of the movement buttons, well, I get clumsy and then I get dead. 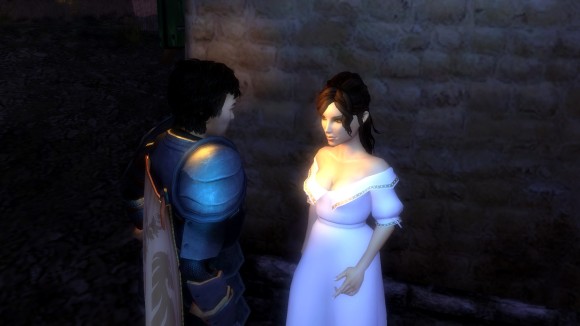 But let’s also ignore THAT for a second, because that’s a problem with me and not with the game.  Venetica – Gold Edition, is an action RPG, where you a pre-determined character of no particular class, the beautiful orphan Scarlett. You start the game inappropriately dressed for adventuring (spoiler: it doesn’t seem to get any better, clothing-wise, for poor Scarlett), but in the introductory cutscenes, you tell your beloved that you’re not cut out for the adventuring life. So, yeah, about that.

In a slight upset of a typical trope, Scarlett finds herself meeting her destiny on the back side of her lover’s death. Turns out, she’s not an orphan, exactly.  She is instead the daughter of Death, and regardless of the motivation you choose to embrace, she’s going on a quest, and it’s of the world-saving variety.

I feel like I’m making fun of Venetica – Gold Edition more than it deserves here, because I like the hero being a woman, and I like how the game invites a giggle or two at its own expense. There’s some narratively interesting stuff going on here, but I think I lack the patience with the game style to see where it wants to take me.  There’s no true tutorial, and I found myself hunting for settings in the keybinds menu more than once when I couldn’t figure out how to do things.  The Steam version claims to have partial controller support, so I’m hoping that will ease some of the control issues I was having.

Because I did have a hell of a time with the combat.  Basic things you come to expect in a hack & slash title are locked behind skill points, like block.  You can roll from the beginning, but I couldn’t make it work without checking keybinds – turns out roll is bound to space, so you need to press that as well as a directional key in order to roll in combat. And if you happen to accidentally sheathe your weapon? You’re just going to stand there and look pretty while someone beats you up.

Overall, the things I like about Venetica definitely outnumbered the things I didn’t like. Sure, click to loot was a little awkward, as was the lack of any kind of loot indicator.  The inventory is unsortable, and if you’re like me, you pick up a ton of stuff without any idea of what you’re supposed to do with it. I’ve seen this game compared to the original Fable, and I definitely felt some of that. With an anticipated completion time of at least 20 hours, it’s a bargain title, although a somewhat dated one, and despite my early irritations, one I will gladly go back to.