Kingdom Rush is the first of a three-game tower defense series.  The cutsey graphics might make you think this is one of those super-casual, can’t possibly lose games, but you’d be wrong.  Now, I haven’t played a lot of tower defense games – I’m absolutely guilty of the assumption that if you’ve played one, there’s no real reason to seek out others – after all, don’t they all play pretty much the same? These games tend to be light on story, if they even bother with story at all, but in a lot of ways, they scratch the same itch as puzzle games, so it matters less if they’re repetitive and more if they actually are satisfyingly challenging.

At least for me, playing on normal, Kingdom Rush is satisfyingly challenging. In each map, you’re given a set number of “strategic spots” where you can build towers, and multiple kinds of towers to choose from.  You’re given four basic towers: two are single target attackers, one physical and one magical, one is an area attack, and the last spawns guards that help bottleneck enemies into a convenient position for your towers to do their job.

But once you complete your first level, things start to get interesting.  Each level you complete earns you stars based on how few monsters got through your defenses.  In Kingdom Rush, stars aren’t just symbols of how well you’re doing – they’re spendable currency.  You can use them to buy upgrades to the four basic tower types, as well as to the two spells you’re given (one of is a rain of fire, which drops AoE magic damage, and the other is a spell that summons soldiers in much the same way as a guard tower).

After a few levels, you start unlocking heroes – characters that are far more powerful than the guards and soldiers you already have access to, and who are controllable in that you can move them anywhere on the map. More than once, my hero saved my bacon, and although I’m not sure how common this type of unit is in tower defense games, I feel like it adds a little more strategy and control when the unexpected inevitably happens.

The levels feel like they’re about the right length so far – not so long that I run out of things to place and upgrade, but not so short that I feel like one placement mistake early on will doom me because there’s not enough time to make back the gold.  The main campaign is 12 levels, and there are three other mini-campaigns to play as well. Add in three difficulty levels and alternate play modes, and there’s a lot of game here. 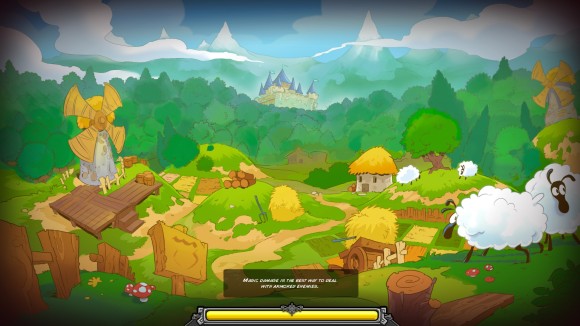 The main thing that keeps me from giving Kingdom Rush an unreserved two thumbs up is some optimization issues.   I’m now running Windows 10, so I’m not sure if that’s the problem, but the first time I loaded it up, it freaked out about resolution in the background, which I didn’t realize until I tried to close the game out, and was left with a window I had to force quit.   The second time, I attempted to play in a lower resolution windowed mode, but the game kept freezing on me.  By the third try, I was back to full-screen, and although the game seemed to have worked out the resolution issues, the load screens were painfully long.

Now, I don’t mean 30 seconds to a minute long, I mean 5 minutes minimum.  Given that the first load screen takes you to the map for level selection, and then you get another load screen before the level starts, this made trying to play Kingdom Rush extremely tedious. That said, poking around, I didn’t find anyone else posting about this particular issue, so either it’s specific to my setup, and therefore unlikely to affect the majority of players, or the rest of the player base is more patient than I am.

Kingdom Rush is currently available in the Bundle Stars Indie Heroes Bundle with 7 other games (including another tower defense title, PixelJunk Monsters Ultimate) for $2.99 and there’s no listed end date on the bundle.  As with most mobile versions of computer games, you can certainly pick it up cheaper if you prefer to play on a phone or tablet (although some mobile versions require in app purchasing). At this time, there just is no compelling reason to pay full price on Steam for this title; even if you want to toss money at the devs, there are two other games in the series you can purchase.