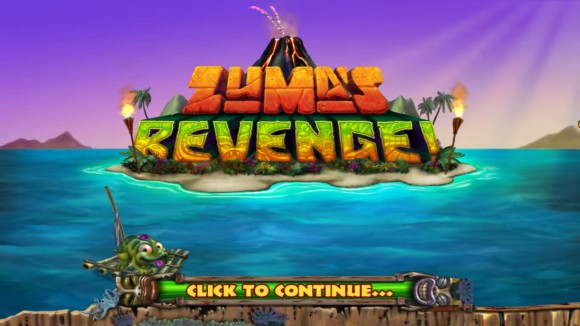 So, I think I played Zuma’s Revenge many moons ago, but when I discovered that there was Zuma Deluxe before Zuma’s Revenge, now I’m not so sure. That said, I’m also not entirely sure it matters.   The blessing and curse of casual games is how interchangeable they often feel. But PopCap has been doing this a long time, and they do it really well.

There’s a story, in the loosest sense of the world. You’re a frog that’s shipwrecked on an island that’s not so friendly, and you have to shoot orbs out of your mouth in order to … oh, I don’t even know. Forget the story.  This is not a game you play for story, you play it because the play is completely satisfying and just challenging enough. 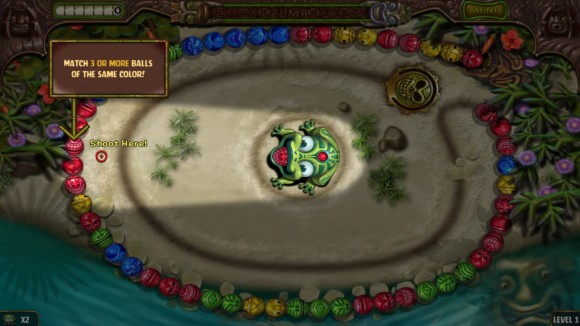 Match three or more orbs of the same color, and they disappear.  If the orbs on either side match, the line will roll back until they touch – if this also makes a three or more, you get a combo, worth bonus points.  As you clear orbs, the meter at the top of the screen will fill; once it’s full, new orbs will stop spawning.  However, if any of the orbs make it to the golden skull, you lose a life.

It’s a simple enough concept, but it’s really the different board configurations that keep it interesting.  There are also power ups that offer different advantages, from slowing the whole line of orbs, to giving you a line that shows you exactly where the next orb will land, to a short rollback to give you room to breathe.

The game saves your progress on exit, and there are checkpoints throughout, which give you the option to restart the game at the highest checkpoint level if you lose all of your lives.  Every 10 levels, there’s a boss battle, where instead of shooting for combos, you ideally want to make gaps in the string of orbs so you can shoot at the boss on the other side, all the while avoiding his shots. It’s a nice touch, giving a little bit of variety without straying too far from the formula. 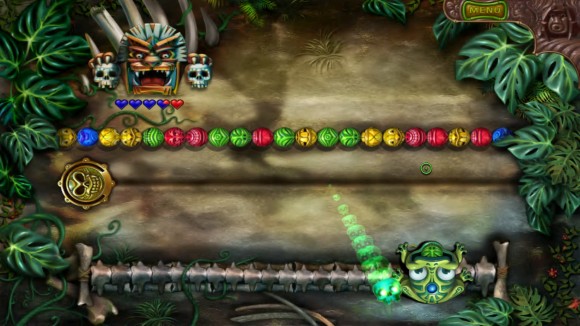 As you progress through the adventure mode of Zuma’s Revenge, you will unlock other game modes, adding to the replay value.  Last I recall, most of PopCap’s titles ran $10, and I was ready to recommend this one at that price.  However, they recently decreased the price of some of their older games, and at $5, I’d consider this a must buy for anyone who likes to dabble in time waster casual games.

One thought on “Zuma’s Revenge”