I know I keep saying I’m going to try to talk less about games in early access, but here’s the thing.  The terrible games in early access should be talked about to warn people from buying abandoned or just sub-par products.  The great ones need all the press they can get, even from ridiculous little blogs like this one.

And Hearthlands is one of the really really fantastic ones.

One important thing to note if you have any kind of history with city builders: outside of the tutorial, this is a completely sandbox experience.  There is no campaign. There are no scenarios.  You choose your culture, customize your leader, tweak some settings for preference and difficulty, and away you go.  You do have an advisor, but he or she never seems to tell you stuff like “Hey dummy, you have six buildings that need logs and only one lumber camp, you might want to do something about that.”

Nope, once you’re done with the tutorial, Hearthlands will not hold your hand.  It’s not that the information is unavailable, but you are going to need to seek it out.  In my second attempt (lets not talk about my first attempt, ok?), I needed to supply my people with mead.  You need honey to make mead.  So I had a beekeeper’s lodge, and a bunch of beehives, and sure, I mean, I probably didn’t put them in optimal places, but it took me quite some time to get my honey-production chain working appropriately, so there was a lot of turmoil happening around booze. 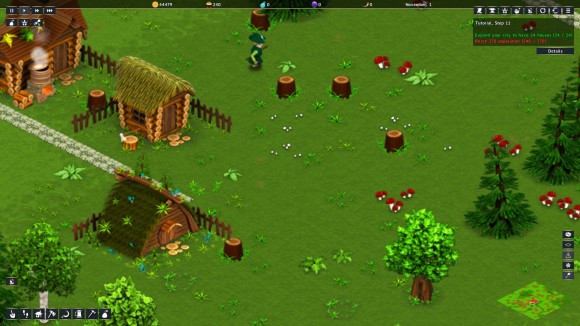 I’d be pretty pleased with the game even if it were just basic city building and economic management.  But there’s a whole lot more going on here. You need to make sure you have a military and police presence, both to keep rivals from just coming and destroying you, and to defend against things like spectres and goblins and the walking freaking dead if you get too close to a graveyard. There are buildings that give you research points – one for technology and one for spells, and given the limitations of each culture, you’re going to need to start producing those things as soon as possible.  You have to worry about your city’s reputation – if people are starving or there’s a lot of crime, immigrants won’t want to live there.

Thankfully, Hearthlands seems to have done away with the irritating city builder trope of maintenance shacks and buildings randomly falling down if you forget to build them (or if you just don’t have adequate coverage).  I’ve only had one fire – well, series of fires I guess you’d say, and those were mostly caused by my failure to build an army in a timely fashion.

Yeah, that’s what happens when you irritate another ruler and you can’t defend yourself. So don’t do that.

Zoom in too far, and you can see the limitations of the graphics, but I don’t know anyone who plays city builders for the graphics (especially since their heyday was about 15 years ago).  I keep forgetting to check if there’s a bunch of keyboard shortcuts I don’t know about, or if you’re really meant to click all the things. I’d love a real honest to goodness manual or at least some kind of production chain infographic with resource pictures. But these are minor complaints, really.

So what if I can’t figure out just yet how fishing works? So what if I haven’t gotten a world seed that allows me to get anywhere near all the resources I need? Next time I go in, I’m going to turn some of those difficulty options way down and take my time and learn the game and build stuff. Going in as someone experienced with city builders in general but completely new to Hearthlands, I’m getting wrecked on easy with default options. I have a lot to learn.

I have yet to encounter a single bug, and I only wish that every early access title was this polished. The developers are unsure how much more they intend to put in before fully releasing the game, and they do expect the price to increase after release.  In fact, it’s currently $25 if bought from their website, whereas it’s $10 on Steam.  For the next several days, it’s on sale for only $5 on the Humble Store, and I feel vaguely guilty for having paid that little.