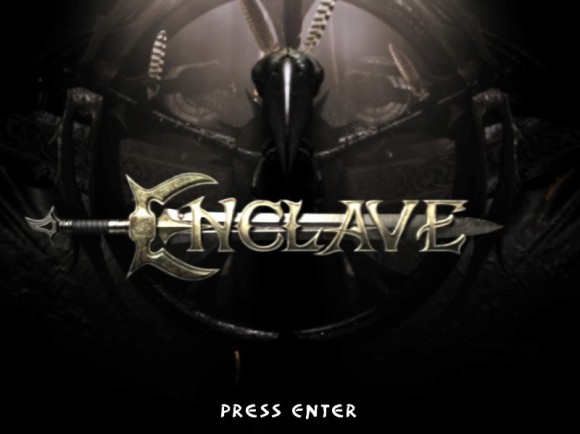 Enclave is a dated, yet still playable, fantasy action game. If you feel like running around mindlessly slaughtering things and picking up gold for a bit, you could make a lot worse choices.  However, if you’re looking for a lot of depth, with silly things like skill points, experience and gear? This isn’t the game for you.

For its age, the graphics are pretty decent, but I booted up Enclave expecting an RPG. This is not an RPG in any traditional sense.  There is no accessible inventory, no character creation, and at least through the third chapter, no skills.  You can attack and you can block with the left and right mouse buttons.  You can drink health potions, and you can swap weapons and offhands, assuming you have more than one.

Not being what I expected, I wanted to give it a fair shot anyway.  You start the game in a very Elder Scrolls sort of way – locked in a prison you must escape from. After some initial difficulty with the controls – how do I use this lever? how do I use the torch I just picked up? – I sort of settled into a monster slaying groove. The end of each level lets you know how well you did at finding all the gold pickups, which you will eventually need to equip your characters, since this game isn’t so much about the loot.

Starting with the third mission, you can choose between the two characters you have unlocked – the knight you begin the game as, and the huntress you meet at the end of the first mission.  You’re then given the option to purchase gear with your gold. The way I understand it, if at the beginning of level 3, you buy a short bow and 120 arrows, you will also start level four with the same equipment unless you switch characters. It’s an odd system, letting you purchase upgrades between missions, but I like the idea that if you are diligent about looking for gold spawns, you aren’t relying on RNG for your upgrades.

The UI is super simplistic, mostly because there isn’t much information that you need while you play.  Everything is very linear – at any given time, there’s really only one way to go, although you can (and should) wander off and check in nooks & crannies for additional gold.

There are two campaigns (the light & the dark), and three difficulty levels, plus multiple unlockable characters that – at least theoretically – have very different play styles.  If you enjoy the game, there’s definitely some replay value.  However, it’s best to keep expectations low, because it’s just not that deep.

It makes me a little sad when the best thing I can say about a game is “Well, it’s not awful”, but that’s pretty much where I’m at with Enclave. It’s not terrible.  It actually holds up really well for its age, but it’s also very far from what I think of when I think RPG.  There is an overarching story, told mostly in cutscenes between missions, but it didn’t really grab me. Given its bargain price, there’s very little risk here, and its enjoyable enough for what it is.