Every once in awhile, just for kicks, I will sort my Steam Database Calculator list by rating.  Usually it’s because I want to see what games I haven’t even touched yet have really fantastic ratings.  Once in awhile, it’s so that I can discover what is the very worst game I own as far as Steam review scores go.  Seeing a game in the 25% – 50% ratings probably means it’s pretty awful, but you don’t see much lower than that because SOMEONE is going to like pretty much everything, right?

You’re reading that right. I managed to somehow acquire a game with a 3% rating. I didn’t know that was even possible.  I mean, it couldn’t possibly be that bad, could it?

You play as Captain Henry Morgan in this side-scrolling, um, something. The game gives absolutely no indication of what KIND of game it is, but I think it’s supposed to be an action game? I mean. You have a sword and a pistol and you break boxes by pushing the mouse button. If there’s anything fancy, like an inventory screen, character screen, or heck, even a tutorial or options menu, I couldn’t find it.

So, I stroll along to the tavern, where I need to find some woman, except she’s in a locked room. The barmaid tells me I can buy a key from the bartender that will open any locked door. Neat. Apparently, I have money. I don’t have any idea how much money, but it’s enough to buy the key. So I go back upstairs, turn to the right, and try to open the locked door. Nope. So I guess that magic key opens every door but that one. Turns out I’m supposed to be headed to the locked door on the left, not on the right.  When I get to that door it opens just fine.

And then there is a cut scene with voice acting so bad, it defies all logical sense. I mean, I suppose turning my computer’s speakers off would be an option, but off course, it’s the main character’s voice that sounds like gravel on glass and how did this game every get out of QA anyway? But the guards are coming, and my friend tells me to grab the GIANT GLOWING HAIRPIN so I can escape out the backdoor. Um. Ok.  This leads to the absolutely completely guidance free lockpicking mini-game, which I managed to beat only by randomly smashing buttons on my keyboard while jiggling my mouse around and can I be done now? 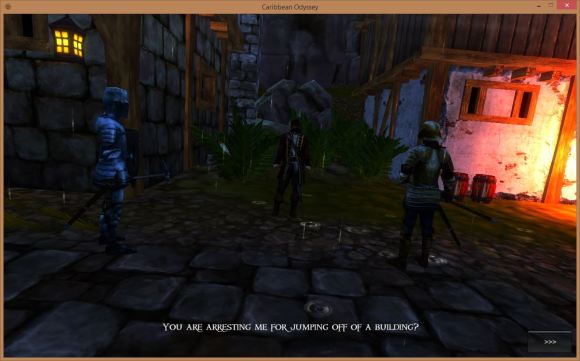 No, because I fall right into another cut scene – with more bad writing and even worse voice acting. Apparently, I’m a wanted pirate who, naturally, has done nothing wrong. Someone tells me “I promise it won’t hurt a bit. NOT!” and oh God. That 3% is generous, my friends, generous indeed.

Now my instructions are to get to the docks alive. I figure, this is probably going to kill me, so let’s do this, get a screenshot of the death scene, and move on.  But I don’t know which way the docks are.  Since this is a side-scroller, I do what feels natural – I run to the right. Along the way I kill a handful of guards by repeatedly smashing the left mouse button while they stare at me slack jawed and glassy eyed, and a couple of them even manage a single attack against the six or so I make to kill them. I have 51 bottles of rum, rumored to restore health, but I have no idea how to drink it, so I keep running, until I hear my own gawd-awful gargling with rocks voice tell me “I cannot go this way.”

Apparently, the docks were to the left. A map or an arrow or really any sort of clue might have been nice.

Finally, as I turn tail to try to get to the docks alive in the other direction, a guard gets off a lucky swing, and the screen goes red, and I’m all excited for my screen shot and then the game dumps me back to the beginning of the last cut scene, which, as I may have mentioned, was painful enough to watch once let alone twice.  I start mashing the escape key until I finally get this message. 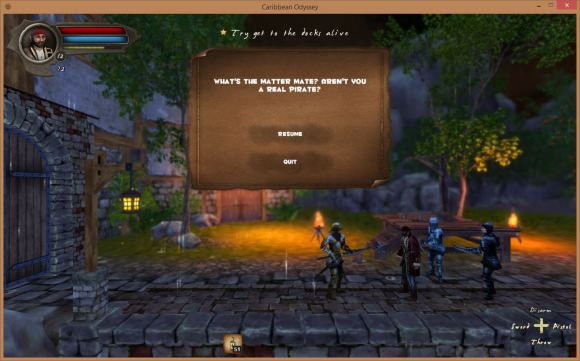 If this is what being “a real pirate” is, then no, I am most decidedly not a real pirate. No respectable pirate would put themselves through this, at least not without the fortification of a whole lot of rum first.