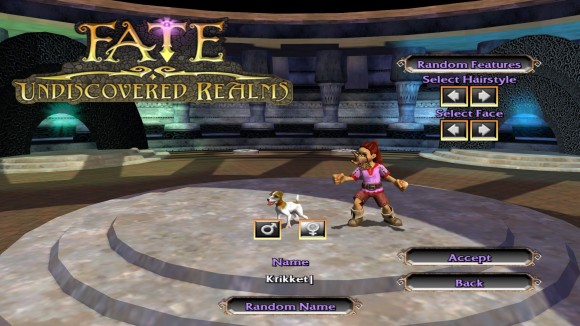 The FATE series was one of the earlier franchises to capitalize on the popularity of Blizzard’s Diablo II, but this second entry in the series seems to lack a lot of the depth of similar games.  At game start, you don’t select a class, rather, you’re given a rather generic hero.  It is possible to import a character from the previous FATE game, however, I am unsure of how that would effect the game; the early levels are so simplistic, a character of any power would only need to look at the monsters in order for them to fall down. 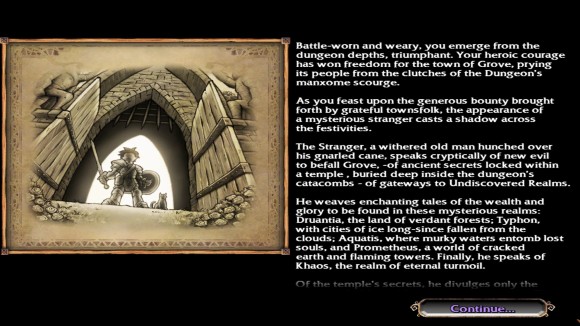 The background of the universe is given to the player in a few screens before the game start, and for me, this was the most captivating part of the game so far.  The voice-over narration is well done. However, once the storytelling ended, my interest in the game started to wane quickly. 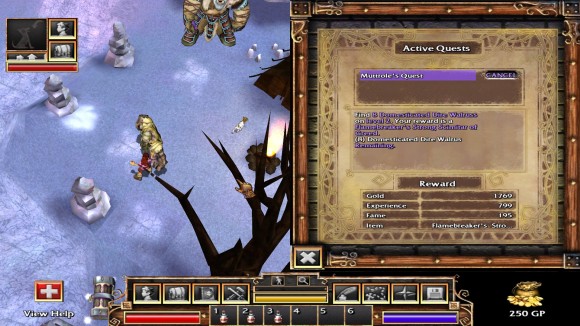 Let’s look at a couple of things here.  First, the “action” bar (and I use the term loosely) contains nothing but potions. Combat solely consists of walking up to a bad thing and rapidly clicking the left mouse button. While I have no doubt that you get additional abilities as you go along, after leveling up multiple times and still having nothing else to do but left click & push a number key to quaff an occasional potion, I really had no interest in continuing along to find out when that actually happens.

Secondly, the first quest you are likely to complete – you’re sent into the dungeon to wrangle some Dire Walruses. Great. Except you really don’t know what you’re looking for, and when you walk close enough to one to mouse over it, it disappears.  Apparently, because you wrangled it. I figured this out only after checking my quest log after nearly clearing the level, and thinking I had yet to see a Dire Walrus. I mean. Dire Walrus people. You’d expect them to be pretty big, right? Nope. They look like bugs. I mean, big bugs, but nothing like I’d expect out of something called a Dire Walrus. 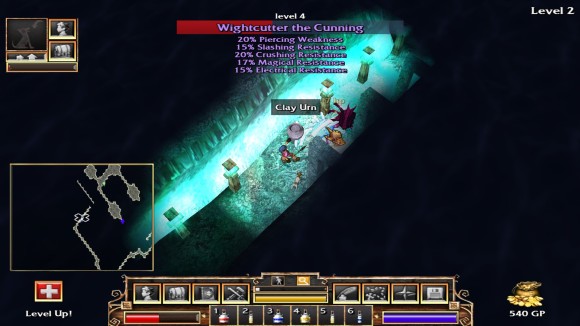 I know some of you think I’m nitpicking here, but when there’s so little going on, being able to understand what the game actually wants you to do matters.  There are pop-up tips, but none of them mentioned a map (I took a chance and pushed M – it worked).  Then, I figured out on my own that those little green diamonds on the mini map were quest objectives. At least, they were Dire Walrus locations.

The biggest challenge I faced thus far was Wightcutter (pictured above).  It wasn’t so much that he was a difficult monster – he wasn’t – but that he kept getting stuck behind that clay urn I hadn’t broken yet, and his health kept resetting. Once I broke the urn, he died in about four hits. That moderately low health bar you see wasn’t from the big bad – it was from not being arsed to drink a potion through half the level.

There are three realms full of deep dungeons and quests, but I’m just not able to bring myself to care.  I didn’t love Torchlight, but it was more compelling than FATE: Undiscovered Realms, but if I have an ARPG itch that needs scratching, I’m far more likely to revisit Diablo III, Torchlight II, or The Incredible Adventures of Van Helsing, all of which had more satisfying game play and more interesting stories & settings.

To be fair, it’s possible that the game is more enjoyable due to the available mods, but I believe that mods should only augment an already entertaining game, not create one when the developers have failed.  Maybe it suffers more than most due to its age.  I don’t know.  Personally, I don’t feel that this game is worth the $8 asking price; it doesn’t feel complete to me.