The Incredible Adventures of Van Helsing

The Incredible Adventures of Van Helsing on Steam (demo available)

The Incredible Adventures of Van Helsing is a game I hadn’t even heard of until GOG.com had it’s latest insomnia sale.  I didn’t buy it then because I assumed it was some retro game I’d never heard of, and we all know how it goes when I try out retro games without my nostalgia goggles on.  Turns out, it’s a fairly new game, the first in a four-part series, and it’s actually pretty damn good.

Please note here, when I say “good” I mean exactly that. It certainly not innovative – it’s the most Diablo-esque game I’ve ever played.  If you hated the Diablo franchise, give this a pass. 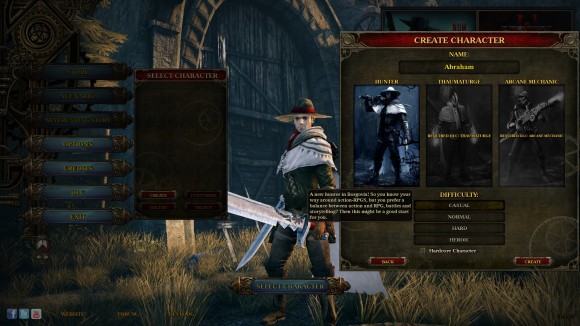 The base game only gives you access to a single character class – the hunter.  There are two others available as DLC  (or as part of the complete pack). I picked this game up as part of IndieGala’s Spring Bundle (it’s hard to pass up 10 games for under $5, even if you’re not sure you’ll like ANY of them), so I don’t have any of the DLC. If, after completing the story mode, I feel there’s any replay value here, I will likely grab at least one of the other classes – each is available separately for $3.99 on Steam.

Once you have completed the story mode, there are two other unlockable modes – scenario and endless story.  There are four difficulty modes and the option for Hardcore (permadeath) play.  You can also play online multiplayer.

The world is Steampunk, and the story thus far (about an hour in) is intriguing.  The game play itself is exactly what you’d expect from an ARPG; lots of quests, lots of monsters, lots of loot. You also have a companion in Katerina, the ghost, who will help you fight, and provide lots of opportunities for witty banter. The voice acting of both the main character and the companion are excellent; most of the rest of it is hit and miss.

There’s a pop-up tutorial, which I don’t think was nearly as involved as it could have been.  I have some abilities that I’m not sure how to use, and the rage mechanic is a little confusing.  I figured since I was playing on the easiest difficulty, I could brute force my way through it, but the first boss mob killed me more times than I’m willing to admit to here.

Here’s the thing.  I’m enjoying the game.  The story length of 10-20 hours (depending on skill and how much exploring you do) is more than adequate for a game at this price point. But there’s nothing new here.  If you have a hack-n-slasher you’re still enjoying, there’s no reason to rush out and pick up The Incredible Adventures of Van Helsing (unless of course, you want to take advantage of that sweet bundle). However, if you’re a little bored with Diablo 3, Torchlight 2, Path of Exile, and Grim Dawn, well, this might scratch that beat ’em up itch for a little while.

3 thoughts on “The Incredible Adventures of Van Helsing”