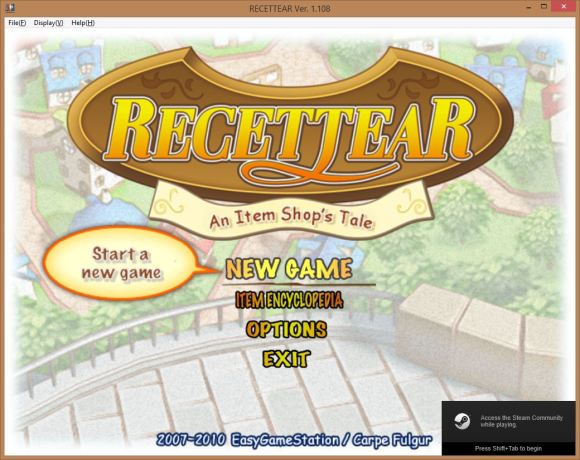 Before I tell you anything about the actual game, I’m going to attempt to help you avoid the frustration I experienced.  If you’re ever not sure what to press, try Z. Seriously. I won’t tell you how long I tried to work the opening menu.  Z is your Enter Key. I cannot explain that particular choice, but there it is. Use Z.

Now that that’s out of the way, Recettear: An Item Shop’s Tale is an oddly compelling game.  It’s part time management game, part economic sim, part hack-n-slash dungeon crawler all wrapped up in an anime package. It shouldn’t work, but it does.

Recettear is an odd little game – an English translation of a Japanese game with a setting that will tend to remind one of France.  It begins with a bunch of backstory with bits of tutorial sprinkled about. In fact, coming up on the end of the first week of game play, I am still getting bits of tutorial. This game wants you to know how it all works.  Which makes sense, I guess, since the person who is teaching you things is also the person who’s looking for you to repay a loan.

Each day is broken into four sections, and it’s up to you how to use the time.  Most activities take one day segment, except dungeon crawling with an adventurer, which takes two.  You probably could play the entire game just buying things in town and selling them at a profit, but the ability to hire someone to go dungeon crawling for your stock is kind of fantastic.

Upon completion of the game’s story mode, additional modes unlock, and given the way that information is passed out to the player, it’s likely that there’s far more to the game as you progress (I’m particularly curious about the unidentified ingredients that keep dropping in dungeons).  I can absolutely see spending many hours with Recettear.

I’m not sure I can wholeheartedly recommend it at a $20 price point, however. It’s the kind of game that one person might find irritatingly hard, while the next would feel like it was entirely too easy.  Going on dungeon adventures isn’t as compelling as it could be – it seems to be reliant more on luck than skill. It’s not a bad game, but all the hybridization makes it difficult to categorize, and it may not please all the people who would normally love an aspect of it.