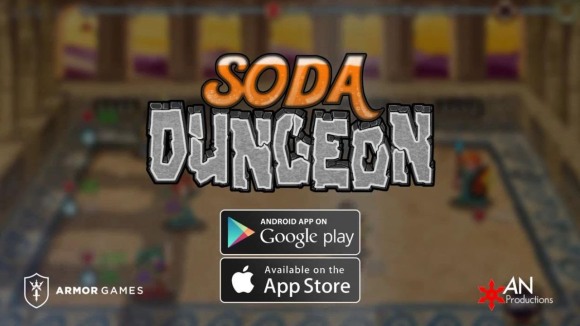 Soda Dungeon is an odd little game. You own a soda tavern & you’re broke. So you recruit fighters from your tavern to go into the nearby dungeons & adventure so that you can grab their loot when they’re defeated in battle.  And yet, still people keep coming. I guess the soda is just that good.

The gold earned from adventuring can be used to upgrade your tavern, hire new adventurers, buy better equipment for your adventurers, or to “warp” ahead in the dungeon to avoid repetitiously going through low-level areas.  The adventurers you hire in the beginning are weak, and don’t have much in the way of skills.  To attract better adventurers, you must buy new kinds of soda, as well as make sure you have adequate seating (stools and tables) to attract enough adventurers.

Now, here’s where it gets a little weird, at least for me.

You can set the dungeon exploration & fighting portion of the game to pretty much play itself.  Once you hire adventurers, you can turn on auto-equip, so that your adventurers will get the best equipment that you own. You can turn on auto-combat, and your dungeon party will go to town on everything without any input from you.  Once every ten levels, you’ll get the option to pick one of three treasure chests, but even that’s not mandatory; wait long enough & the game picks for you.  In this way, Soda Dungeon reminds me of those idle clicker games.

Bear in mind, that this is optional.  You can adjust your equipment manually. You can perform all the combat manually. It’s totally up to you.

Unsurprisingly, Soda Dungeon doesn’t take itself too seriously, and that’s a lot of the charm. It’s an intriguing time waster for mobile devices that is as complex as you wish to make it.  I probably would have picked this up for a couple of bucks, but for free (especially with free in-game purchases via Amazon Underground), it’s a no-brainer.