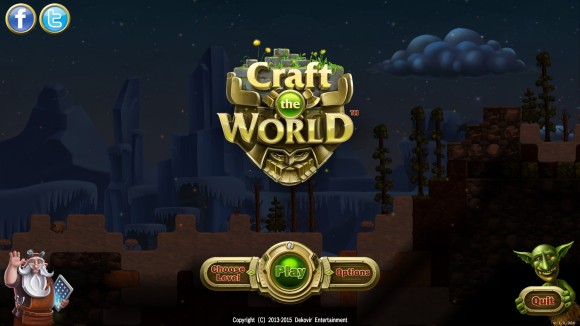 Craft the World is billed as a “unique sandbox strategy game” and maybe that’s why I find myself struggling to explain it without referencing bits and pieces of other games I’ve enjoyed through the years. It plucks ideas from different genres and patches them back together in a way that – at least for me – was mostly successful.

Campaign mode will ease you in. You start with a single dwarf and game concepts are introduced gradually through a pretty robust tutorial. As you level up, you get more dwarves. As you complete quests and craft items, you open up more options in the technology tree.

Throughout the game, you’re balancing a need for crafting resources (which help your dwarves be safe and happy) with a desire to explore and find portal pieces in order to progress to the next level. There’s also a timer in the upper right hand corner of the screen that tells you the next time the undead will come, en masse, to try to destroy you.

So there’s crafting, exploration, resource-management, and combat.  What there isn’t is an easy way to micromanage.  There is the option to take control of an individual dwarf, but most of the time, you give orders by marking something to be done, and then waiting for someone to come along and do it.  Sometimes, this is frustrating, and sometimes your dwarves get confused and end up doing nothing for long periods of time. Over time, there are unlockable direct magic spells that can be used, and sometimes that will “unstick” a stuck dwarf.

The game is far from perfect – a common complaint is that it seems to be optimized for mobile devices instead of PC/Mac – but I found it compelling enough that I’ve dropped over 60 hours into it over the past two years. Most of the playtime is pretty low pressure – it’s not a difficult game over all – but digging for resources, exploring the map, and building up my base all have an allure for me without needing to be overly challenging.

2 thoughts on “Craft the World”