I cannot think of too many things I’d like doing LESS in real life than being responsible for a fast-paced restaurant. However, find me a cooking game? I’m there.

But even “fast-paced” casual games are usually pretty easy most of the way through.  Every once in awhile, you get a persnickety level that gives you some trouble, but nothing too crazy.

Cook, Serve, Delicious! is too crazy sometimes. And I mean that in the best way possible.

The game offers a couple of quick tutorials (trust me, you want to play through the tutorials), and then pretty much sets you loose.

At the beginning of campaign mode, you get four menu slots, and four service windows, and some money.  You choose what recipes to buy – they all have different pros and cons – and set up your menu.  You will want to change up your menu frequently to avoid “menu rot” (which isn’t as gross as it sounds), but you probably will also want to pick up salad, soda, and/or ice cream because those recipes are immune to menu rot and don’t need to be rotated out. 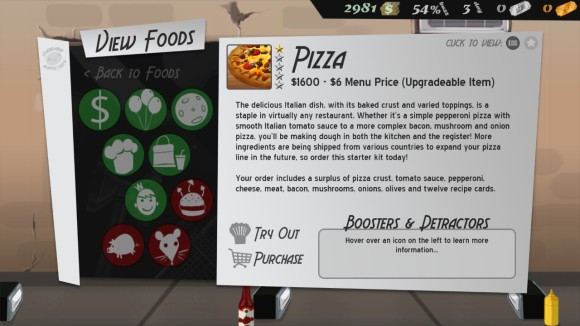 There are also equipment upgrades that become available as you successfully complete more days of service. Some upgrades are required before you can offer certain menu items. 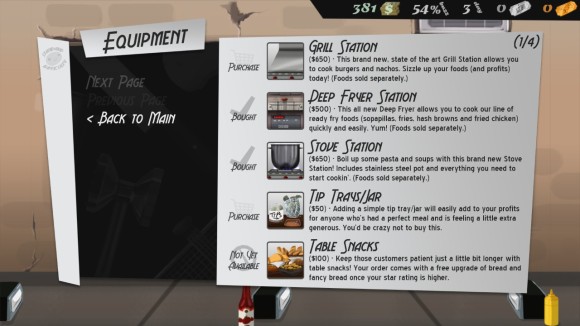 See? You have a lot to think about before you even start your first day.

You can play with either the keyboard or the mouse (or, I’m guessing a combination of the two, but I’ve never tried it).  I usually stick with the keyboard as I find I can’t move the mouse around & click fast enough to keep up. On mobile devices, it’s all done by touch.

Every recipe has several variations, each of which requires different key presses.  After awhile, you’ll know a salad with ranch, cheese and everything on it is R C B O M G, but in the beginning, when you actually have to read to see what you’re doing, it’s easy to get behind. Don’t get discouraged! After awhile, it just feels natural, but never easy, at least it never does for me. 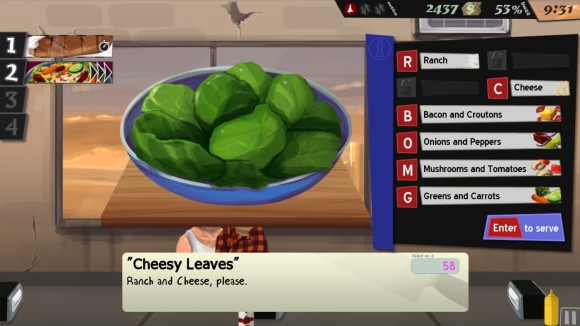 Some foods have available upgrades; upgraded food will bring a higher price, but offer more ingredients & variations. Some foods will have multiple pages of potential ingredients.  As you complete chapters of the campaign, more menu slots and serving stations are added. There are also special events that you will need to complete during the campaign to progress.

There’s some room for errors (not having a perfect day won’t ruin your whole game), but you don’t keep moving on just for showing up. You’ve got to work for it.

Since release, Vertigo has also added a Battle Kitchen mode, and online competitive support.  I haven’t played with multiplayer at all, but the option is there for those who want it.

I bought this on Steam when it was discounted, but I’ve enjoyed it so much I also bought it for my Kindle Fire, and would absolutely recommend it at full price.

One thought on “Cook, Serve, Delicious!”